(This history is by no means a complete record of our collective parish story. It tries to highlight some of the events which occurred under each of our five pastors.)

On June 8, 1966, His Eminence, John Cardinal Krol, Archbishop of Philadelphia, issued the decree establishing the parish of Saint Martha in the Far Northeast section of Philadelphia. He had decided that the surrounding parishes of Our Lady of Calvary, St. Anselm and Christ the King were not sufficient to supply the needs of the burgeoning Catholic population which flooded new housing developments. The Rev. George J. Dougherty, associate pastor of Saint Ambrose Parish, was chosen first pastor, in charge of the care of 900 families. The first parish Mass and first baptisms were celebrated in the lower church of Saint Anselm’s on June 19. On October 23, Mass began to be celebrated in the auditorium of Archbishop Ryan High School as it would be until December of 1967. The parish school opened on September 8.

On December 11, 1966, a procession from Ryan went to the parish grounds for ground breaking and settlement on a property which would become the rectory at 11001 Calera Road.

On June 11, 1967, Father John VanStone became the first associate pastor at St. Martha’s. On September 6, 1967, school opened in the new school building, and a CCD program, organized by Father VanStone and Sister Veronica Marie, the first school principal, was organized. By far, the greatest of all the many events of 1967 was the celebration of the First Mass in the new Saint Martha Church, on Christmas Eve of 1967.
The church and school buildings were dedicated by Cardinal Krol on March 9, 1969.

Father Dougherty served as pastor until July 1, 1975, when he was reassigned to be pastor of St. Bernadette’s in Drexel Hill. He died September 22, 1990, while serving as Pastor Emeritus of that parish.

Father Dougherty was succeeded by the Rev. Gerard H. Scherf, who came to St. Martha’s after being pastor of Saint Ludwig Church. Because of his long term as pastor, from 1975 until 1996, for many of our parishioners Father Scherf is considered “the” pastor of Saint Martha’s. He celebrated his 30th, 35th and 40th anniversaries as a priest at St. Martha’s. His pastorate covered a time of great growth and physical improvement of the parish buildings and facilities. Two particular projects were dear to Father’s heart. On June 25 1978, a blessing and rededication of the parish bells was celebrated. They were originally located in the tower of Saint Ludwig Parish, and were cast by the McShane Foundry of Baltimore in 1970. They were originally consecrated by Archbishop Prendergast on November 28, 1907. When St. Ludwig’s closed on 15 June 1975, the bells rang for the last time at 1:30 PM at the close of Solemn Benediction. On June 17, they came to rest on the lawn of Saint Martha’s waiting for the time they would ring again. On June 14, 1978, the three bells were raised up toward heaven again on a new bell tower constructed on the parish grounds and the rededication followed on the 25th.
Father Scherf’s other major project was installing beautiful stained glass windows, made in Innsbruck Germany at the turn of the century, and which graced the closed St. Ludwig’s Church, into our parish church. This took place over a period of time from June to December 1980. Father also secured the beautiful old pipe organ from Corpus Christi parish when it closed, and stations of the cross from St. Ludwig’s; add to the beauty of our liturgy and church to this day.
Towards the end of his pastorate, Father Scherf’s health began to decline. As if by Providence, the Franciscan Friars from Archbishop Ryan began to offer more and more assistance at the parish over the years. Thus, it was a natural and graced decision that when Father retired in June 1996, the Franciscans became responsible for the spiritual welfare of the parish. Father Scherf died in retirement in November 1997. His funeral was a great testimony to the place he held in the hearts of his people and in the history of the parish.

In June 1996, Father James Gannon, OFM, became the third pastor of Saint Martha parish. Bringing with them the charisms which made St. Francis of Assisi beloved the world over, Father Jim and the Franciscans did much to renew the spiritual and social life of the parish. In addition, since the Sisters of Mercy had withdrawn from the parish, they had the task of finishing the conversion of the former convent into the new rectory, begun by Father Scherf. The rectory not only contains residences for priests, it also was configured to hold offices and meeting areas, as well as a small chapel for the friars. Father Jim hired the first Sisters who would serve as Pastoral Associates in the areas of liturgical music, care for the sick and shut in, and religious education. The sanctuary was painted and simplified, and many other projects, big and small, added to the quality of parish life. A Parish Self-Study was completed, with the formulation of a parish Mission Statement in May of 2000. Father Jim’s greatest dream was to respond to a great need of the parishioners: a new accessible multi-purpose building which would serve both the school community as a gymnasium and older parishioners as a social center. A Building Committee was formed and fundraising began.

In June 2000, Father Jim was called to serve his congregation. Father John Puodziunas, OFM, was appointed the fourth pastor of Saint Martha’s. Father John continued the Franciscan traditions of hospitality and empowerment. He worked with Pastoral Council on implementing the self study of the parish. His love for liturgy showed itself in innovative and beautiful celebrations through the year. He had a particular care for the young people of the parish, and reached out to them as much as he could. He also had great financial acumen, which he tried to use to stabilize the parish debt which was by now growing. His measures “stropped the bleeding.” He worked towards making the parish stable enough to “finish the dream” and get the parish center built. Unfortunately, he was not to be given enough time to see the project to completion. The same lack of priestly vocations which hit our diocese and many others, resulting in personnel cutbacks, caused the Franciscans to withdraw from St. Martha parish in July 2002, after six years of service. At an emotional farewell Mass, the Friars returned to grateful parishioners symbols of their good and faithful stewardship.

The fifth pastor of St. Martha parish was Father Al Masluk. Father Al had served most of his priesthood in the city, with four as Pastor of Our Mother of Sorrows Church in West Philadelphia. He was installed as pastor on July 21, 2002. At his first meeting with Pastoral Council, he asked these representatives of the people the first priority of the parishioners. They were unanimous: build the parish center! After many months of meetings with the Archdiocese, assessment of the parish financial structures, raising of some additional funds, and work by many people in the parish, ground was broken for the new building on September 28, 2003. Everyone present broke ground with small souvenir shovels. A parish picnic followed on the ground which would soon be covered by the building. Real construction commenced in the spring of 2004, and on Saturday evening, October 23, 2004, the building was dedicated by Auxiliary Bishop Joseph McFadden. A gala dinner dance followed. The building, reconfigured from its original plan, consists of “Brian Butler Court,” a gymnasium with a state of the art playing surface, a professional kitchen, storage facilities, and a seminar room which can accommodate small to medium size groups. Since its opening, the building has proven a great blessing for seniors who no longer have to navigate steps, to young people who have the gymnasium facilities they need both for the grade school physical education program and for the CYO sports program, for parishioners at large who gather and socialize at various events held in the gym, and for the community at large, who use the facility for voting.

Our parish celebrated its 40th anniversary in 2006 with a series of events, culminating with an Anniversary Mass and Banquet. With the fortieth anniversary came the birth of the Saint Martha Parish Hall of Fame. Each year, those who have had a significant influence on the parish’s history, or who have carried her fame fare and wide, are inducted into the Hall. Our first two pastors were posthumously inducted with the first class of the Hall of Fame.

One notable member of the Hall is Christopher J. Ferguson, who grew up on Amity Road, attended Saint Martha School (where a plaque marks his first grade classroom, and whose Science Lab is named after him), and went on to become an astronaut. In 2006, Chris was the pilot of STS 115, space shuttle Atlantis. In 2008 he commanded mission STS 126 (Endeavour) and was the commander of the final space shuttle mission ever, STS 135, aboard Atlantis, 8-21 July 2011.

During the summer of 2006, because of a generous response to a capital campaign, we were able to transform our Church from a “temporary church” (as they were built in the 1960s) into a permanent, beautiful temple of the Lord. Painted paneling and carpeting yielded to the warm earth tones of Bethany, where Saint Martha lived, and a permanent marble altar and ambo were made possible by a generous gift of the Willson family. The new altar was dedicated in the fall.

Our parish school has evolved into the “new” Saint Martha School, with upgraded curriculum (including teaching Latin to the eighth grade) and equipment (including the science lab), but the same level of dedication and devotion by our excellent faculty and staff. The work of the Strategic Planning Assistance Team (SPAT) has helped the school towards it goal to be self-sufficient and minimally dependent upon parish subsidy. In addition, St. Martha became a STREAM school in September 2019, with integrated training across the curriculum in Science, Technology, Religion, English and Engineering, Arts and Mathematics, the only school in the area to do so. In addition, SMS offers the Latin language to its eighth grade, to help with vocabulary skills and prepare the students for the study of languages in high school.

Father Al retired as pastor for health reasons on July 8, 2020, and resides in Immaculate Conception parish, Jenkintown, where he hopes to help the local priests, do some teaching, and continue his new career as a children’s book writer.

Father Jonathan Dalin was appointed pastoral administrator of St. Martha’s on June 20, 2020, and took over pastoral leadership on July 8.

The parish looks forward to the future with confidence and hope. As new families take up the mantle of leadership and ministry, we will, by good stewardship, overcome any financial challenges and continue to grow as a people who are as kind and hospitable as our patroness, Martha, the friend of Jesus.

We are a Tithing Parish

God gives us everything we have and allows us to keep 90% of it for any good purpose. He simply asks that we return the first 10% to Him (5% to the local parish, 5% to God’s other good works) in gratitude.  This spirituality of tithing is as old as the Bible itself, and disposes us to make God first in every area of our lives! The aim is to secure not the tithe, but the tither, not the gift, but the giver—for God! 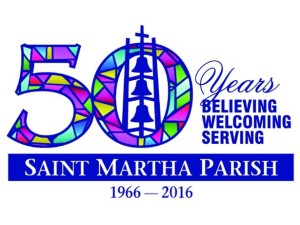